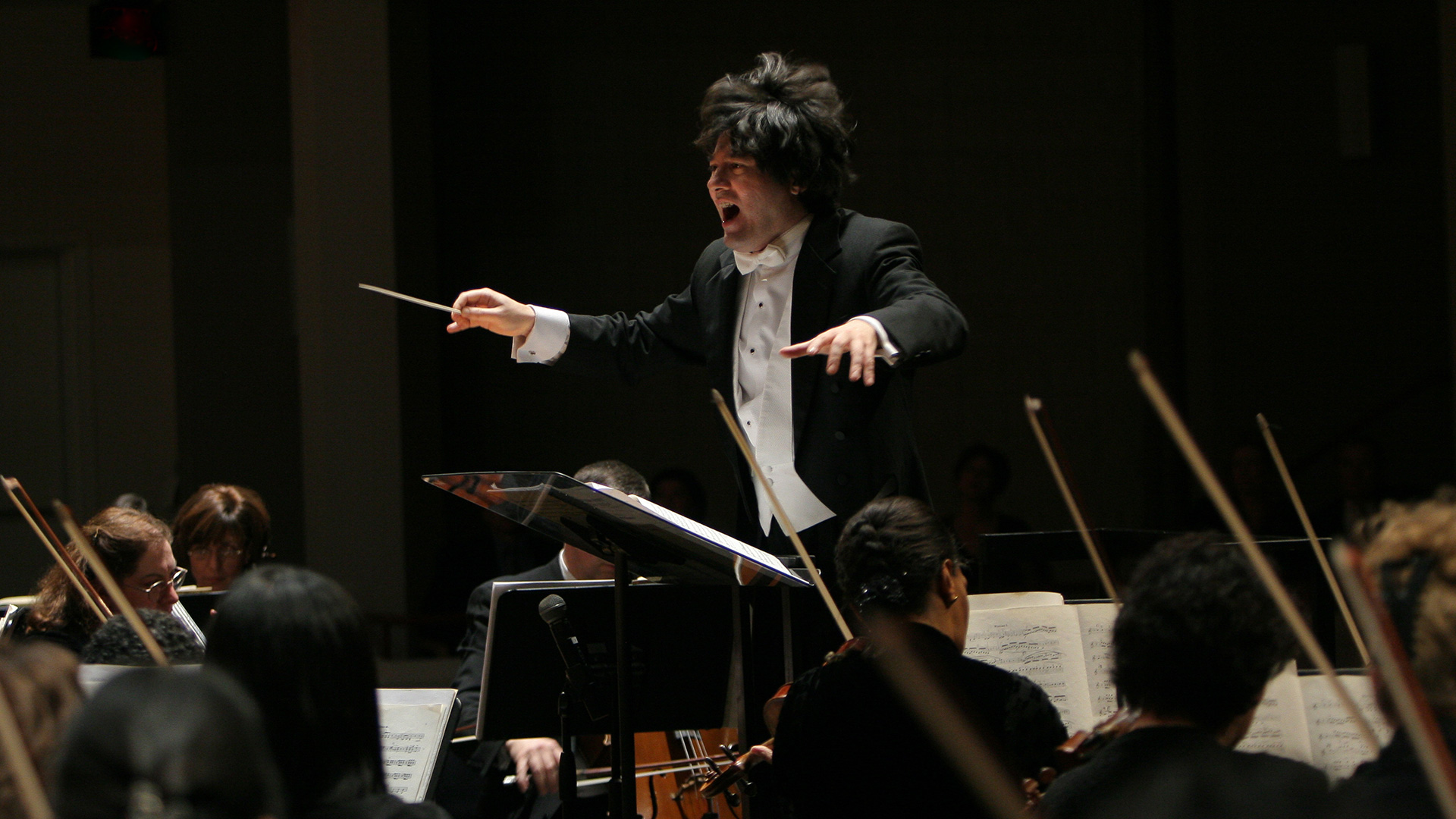 Kluge’s sense of drama was evident…relentless pressure I associate with Arturo Toscanini.

Maestro Kluge brings an epic sense of drama to all of his music– from the music he composes in his studio with his wife Kathryn, to the podium where he electrifies audiences.

They have written for music icons ranging from jazz legend, Branford Marsalis to classical virtuoso, Midori.

A recording of their new American Concerto for Piano & Orchestra is slated to be released in January 2017.

Maestro Kluge’s creative work derives from his passion and conviction that people of different backgrounds can share the essence of their humanity through artistic expression.  The common denominator in all Kim Allen Kluge’s work is his desire to reach audiences in a visceral and thought-provoking manner, often through the juxtaposition of disparate styles or genres.

The Kluges work from their Los Angeles studio.

Cool! Your piece (Vocalise for Branford Marsalis) sounds like me!

And this excerpt (from your American Concerto) is genuinely beautiful — it made me think of Aaron Copland recalling, as an old man, the childhood memory of the start of a big snowstorm.

Kim Kluge is a brilliant and passionate composer whose work is nothing short of magical. His music is so breathtakingly beautiful and powerful, it deeply moves you to your core and heightens any material or experience it is complimenting. Having the opportunity to work with him is a true gift.

Your beautiful and moving composition… A sensitive musician.

For our movie, the Kluges created a 10 million dollar studio-quality orchestral score on a micro-budget!  They produced a stunning naturalness and expressivity that you only find in the best studio recordings. Amazingly, Kluge brings the same fire, passion and poetry to his Kluge Virtual Orchestra that he brings to his live orchestral performances.

I cannot believe my good fortune in having happened upon a composing duo so full of expressivity. Their Kluge Virtual Orchestra was beyond anything I ever expected — very naturalistic. They gave my film unbelievable quality, realism and expressivity — rendering the film timeless and emotionally complete.

Love your themes. Gorgeous! I hope you like how beautifully your music fits “Milton’s Secret”. I am so grateful for it–it is exactly right.

Kim thinks in dramatic terms — knowing when the music should subtly underpin the action, and when it should lead our perceptions of what’s happening on the screen and in the characters’ heads.

Kim and Kathryn are a fantastic resource for any storyteller. They take on every challenge with immense knowledge, passion and sensitivity. Their understanding of the vital role music plays in film, television and other media makes Kim and Kathryn amazing collaborators.

Kluge is an amazing collaborator and really understands that dance can enrich the musical experience. Kim is a creative composer who thinks outside of the box… His “Haiku Suite” was a big hit at The Kennedy Center!

Kim and Kathryn Kluge bring passion, electrifying musicianship and great personal charm to everything they do.  Their capacity to bridge the worlds of classical music, film and  popular music with such ease is remarkable. A rare and precious combination of talents!

You and Kathryn did it! Congratulations on two spectacular and subliminally moving performances of your River Poem composition this weekend! It was a privilege to join you on such an auspicious occasion. We look forward to partnering with you again in the future.

The music is still wafting through my brain! The Kluges’accompaniments for Alice Guy Blaché were positively magical — lyrical and poignant…yet still managing somehow to evoke Belle Époque and the Parisian café-concert. Compositions were seamlessly entwined with the instrumentation and the tough purist audience that day was suitably impressed!

Your music is absolutely beautiful and cinematic. It certainly inspires images and stories which are absolutely fantastic and powerful. A great work!

Working with Kim and Kathryn is simply a pleasure. They deeply understand the emotions we are trying to convey at each point of our film — and know how to convey it through music which is both elegant and thoughtful. And, most of all, they are easy to work with.

When we locked picture on “Trial of Labor”, the story was complete; but it wasn’t until we added the original score from Kim and Kathryn Kluge that the story telling was complete.  I had seen the film so many times, but after watching it with the music I wept for the first time.  Kim and Kathryn worked hard to understand how we wanted the music to compliment our documentary, wrote and delivered files before deadlines and were easy to work with on changes and fine tuning.  I can’t wait to work with them again.

Working with Kim and Kathryn is a positively rewarding experience.  They are truly open to collaboration and I believe their talents will drive them to great success in film scoring.  Most importantly, they don’t just hear music, they feel it.  And it comes through in everything they do.