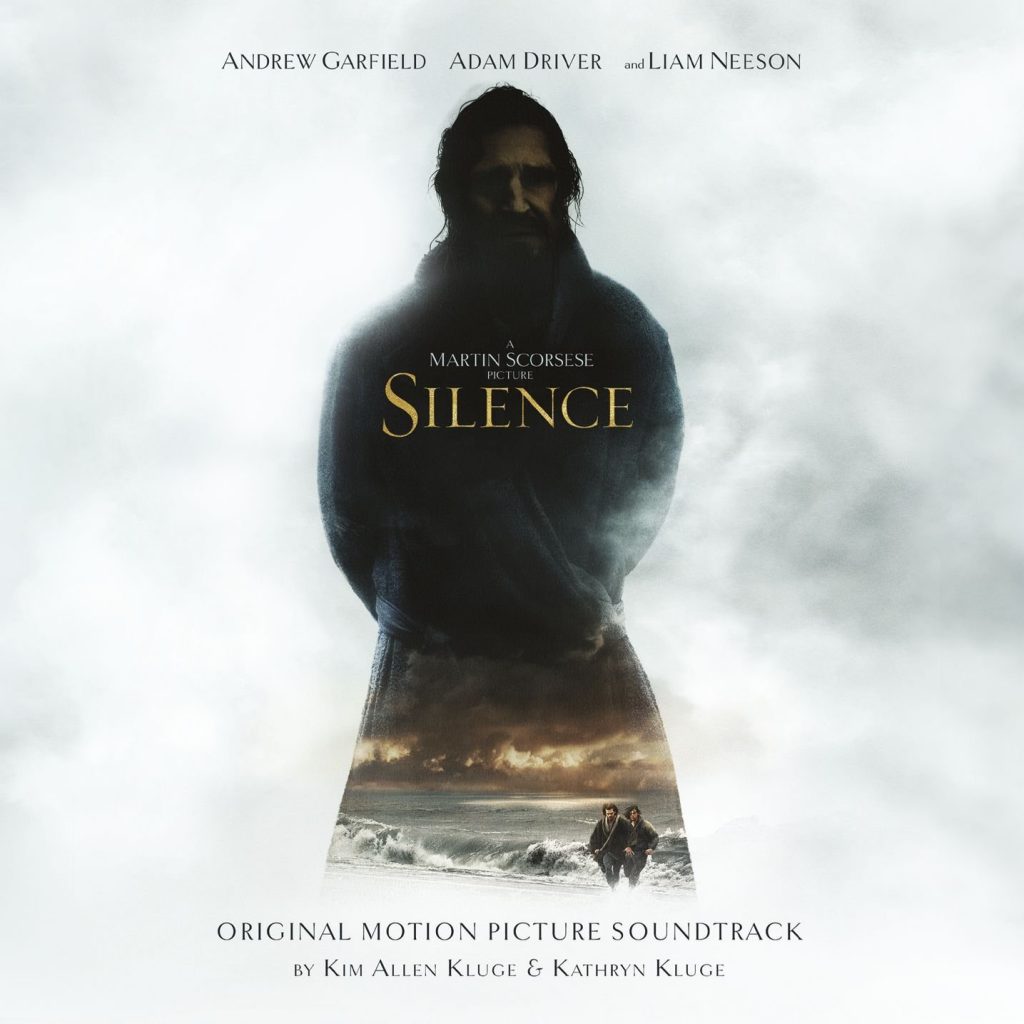 Praise for the Kluges’ Original Score to Silence

“(A) distant presence of varying, mercurial moods…. it links the spiritual and physical worlds…. The score by the Kluges heightens the subtext of the story, is a bridge between centuries old cultures in conflict, and makes “Silence” a better film.”
—The Wall Street Journal
“The organic score of natural sounds (credited to Kathryn and Kim Allen Kluge) supports the drama exquisitely well.”
—Leonard Maltin

“One of this season’s biggest Oscar snubs thus far is the disqualification of the ‘Silence’ score by the husband and wife composing team of Kim Allen Kluge and Kathryn Kluge. Their score is daringly musical in the way that it emanates from nature, yet so subtle that it didn’t pass muster with the Academy’s music branch as ‘a substantial body of music’.  In other words, the classical composers were penalized for succeeding too well in creating an unconventional, Zen-like score at director Martin Scorsese’s urging…. The minimalist ‘Silence’ score by Kim Allen Kluge and Kathryn Kluge is an inventive achievement.”     —Indiewire

“The cinematography by Rodrigo Prieto is stunning, as is the score by talented young composers Kathryn and Kim Allen Kluge.”
—Santa Monica Daily Press

“Still the spiritual component and the echoes of the choirs, so soft and distant that they sound drowned in the equally soft and peaceful waves that never go away keep me hypnotized and give me a feeling of having an endless open space just for myself.  A cue like “Rain falls unceasingly on the sea” which literally sounds like that behind the soft choirs is something I’ve been dreaming of listening to, seeing, living, for a long time.  At times this score made me think of what I often name my favourite score of all times, Hans Zimmer’s ‘Thin Red Line.’”
—Soundtrack Dreams

“Kim Allen Kluge & Kathryn Kluge’s innovative score.  Like Scorsese’s authorial touch, much of it is deeply hidden, the formal approach a wonderful mirror to the historical situation depicted.”
—L’etoile Magazine

“On a technical level, Silence is one of the most polished projects Scorsese has ever taken on. Everything, from the cinematography to the art direction, is nothing short of stellar.  Kim Allen Kluge and Kathryn Kluge’s musical score is particularly unique.”
—flickreel

“The cinematography from Rodrigo Prieto paired with the music score by Kathryn and Kim Allen Kluge give the exotic locations a mesmerizing beauty.”
— We Are Movie Geeks

“This is organic movie making at its best, a never-ending feast for the senses that’s rounded off by a lilting, elegant score courtesy of Kathryn and Kim Allen Kluge.”
—thedullwoodexperiment

“Combine Prieto’s mastery of light with the brilliant Dante Ferreri’s art direction and costume design and the brooding and minimalist score by Kathryn and Kim Allen Kluge, Silence is a feast of the senses: beautiful, moving and masterful.”
— Cath’s Film Forum

“Full of raw emotion and tension, ‘Silence’ is quite simply not one to be missed.  Aided by Kathryn and Kim Allen Kluge’s mesmerising yet sparse score, it is a film well worth devoting your time to.  Scorsese, you’ve done it again.”
— Jack Clarke Movies

“Like Barry Lyndon, every scene looks like a gorgeous painting, while Kim Allen and Kathryn Kluge’s subtle but menacing score conveys the danger of the setting.”
— HeadStuff

“Kathryn and Kim Allen Kluge’s understated yet brilliant work on ‘Silence…. (their) minimalist score adds levels to “Silence” that make the film one of Scorsese’s best.”
—AwardsCircuit

“Considering that this isn’t Scorsese’s usual type of film, the movie requires a more subtle and subdued score, and Kathryn and Kim Allen Kluge deliver some lovely and sublime work.”
—True View Reviews

“The soundtrack, composed by Kim Allen Kluge and Kathryn Kluge, is not your average movie soundtrack. It blends choral voices, unsettling soundscapes, and earthy percussion into some supremely oppressive, but often quite beautiful and atmospheric, music…. if you’re anything like this writer, you’ll seriously
—Casual Critic

“The soundtrack, by Kim Allen Kluge and Kathryn Kluge, is also worthy of note: It blends natural sounds, wordless vocalizations, percussion, and electronic sounds into an unconventional soundscape that is never intrusive and always appropriate.”

“I’m an advocate for modern composition, and choosing someone like Kluge who incorporates both Eastern and Western musical sensibilities makes the movie sonically appealing.”
— Crossmap

“Kathryn Kluge and Kim Allen Kluge’s delicate music, serves a stark contrast to accentuate the agonized cries of the tortured martyrs and the baron foggy landscapes, traditionally associated with tranquility, the perfect underscore to the savage abuse portrayed.”
—The Digital Fix